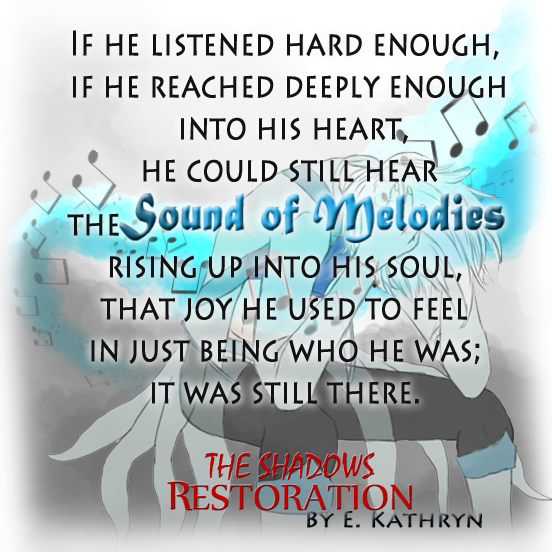 Creeping closer, William slid the door to the side gradually, feeling the ice within drifting out and gasping as the sight of the ice prince on the smaller of the two infirmary beds. Iszeldier looked up abruptly to see William staring at him, but he didn’t drop the scalpel he was holding towards his own abdomen. “Iszie…” William whispered breathlessly.

Iszeldier was biting down on the hem of his shirt to hold it up, but drool and tears had dampened the fabric from the pain as he attempted to cut the Ciaec right out of his body. Iszeldier was sweating hard and there was a mostly empty cup of water close to him which he had been guzzling. His breath accelerated as his eyes locked with William’s but he didn’t make a sound despite the obvious, intense pain he was in.

Taking just one step forward, William reached towards Iszeldier in the brief second he opened his mouth to plead with Iszeldier to stop. “STAY AWAY!!!” Iszeldier screamed suddenly, thrusting his hand out before him and sending William into the wall telekinetically.

Dazed, William fell against the lower bed, knocking his head into the wall but without a word he was able to watch Iszeldier as he continued trying to cut deeply around outline of the Ciaec. He made very little progress and his tears mixed with the blood dripping down his abdomen and staining the hem of his pants.

“Iszeldier…” William whispered very softly as he saw Iszeldier was sobbing wholeheartedly, growing disoriented from the pain, both mental and physical, as it heightened more and more. Jumping forward as fast as he could, William rushed to grab the scalpel from Iszeldier, which was a lot easier than he expected, he tossed the tiny blade as far away from Iszeldier as he could.

Iszeldier stared at his bloody hands, shocked the moment the blade was no longer in his hand, but he did not acknowledge that William was shaking his shoulders. His hands drifted to his face, covering his tear-stained eyes until he was shuddering uncontrollably. Shocked, William stepped back, gaping at the sight of the boy who was once so fun loving, powerful, kind, and uncaring about his own problems. Iszeldier’s psyche had been smashed to smithereens, and as much as he tried to hide it, this was his true heart.

Cowering lower to his knees, Iszeldier curled into himself, so broken he could never come out of this shell, so overwhelmed he covered his ears and wailed quietly, so that no one outside the room could hear him. “Can you hear it?” Iszeldier whispered to William but at the same time, he spoke to the air in the room, still and stagnant.

William’s lips moved deafly as Iszeldier looked up blearily with crimson eyes like burning coals, “Hear what?” William mouthed, Iszeldier thought he heard his voice through the muted grayness of everything around him.

“The sound…” Iszeldier’s eyes lifted slowly until he closed his eyes rather than gazing into the pale fluorescent lights above them, “Of melodies…”

Tensing, William bit his lip and looked down at the wound Iszeldier had inflicted upon himself, it was deep, just above his navel, and oozing thick blood, “You’re losing a lot of blood…” he warned softly. With cautious movements, William took Iszeldier’s shoulders and gently moved him to lay down on the little bed. At this point, William desperately wished he could use the Realm to call for help, since he didn’t dare leave Iszeldier alone in this state.

Iszeldier resisted a little, his hands coming down from his ears and shaking tepidly as he tried to stay upright but a striking pain in his abdomen compelled him to comply. “The music… it’s everywhere…” he rambled quietly, staring up into the light as if he couldn’t see anything. William hurried to gather bandages to soak up and staunch the bleeding. Iszeldier didn’t even wince when William pressed the gauze into the incision near the Ciaec, an area which was always sensitive. “I can’t hear it…” he cringed and began sobbing harder, “It’s gone!”

William applied a little pressure but the bleeding continued and he was starting to panic a little. The incision was no more than an inch long but it had traveled right through his skin, opening up his gut. “Shh…” William coaxed softly, acting on instinct now, “Can you tell me what they sound like?” he urged quickly, trying to get Iszeldier to think, “Listen…” William played into Iszeldier broken heart, “what does it sound like?”

Iszeldier swallowed uneasily, letting the tears flow down either of his temples and into his ears to drown out the ringing noise of the empty grayness he was trapped in. However, if he listened hard enough, if he reached deeply enough into his heart, he could still hear the sound of melodies rising up into his soul, that joy he used to feel in just being who he was in the ASH; it was still there.

Choking up, Iszeldier found himself crying even harder, because the tears made it easier for him to ignore the pain, “William…” he sobbed hopelessly, “I need help! I want to get rid of the Ciaec, but I know I can’t… I need help! Not just with the Ciaec, but to be who I am… I’m going to lose myself like this… I can’t hang on by myself!”

“Shh…” William urged again quietly, “You’ll be okay, I’m here,” he coaxed very gently. Cautiously he removed the gauze to see if the bleeding had slowed and to his relief it had. Removing the pressure, William started folding together a bandage to affix to the wound and muttered quietly, “Think you can stay lying down for a while?” he requested in a cautious tone.

Iszeldier didn’t respond, red-faced and unwilling to see through the darkness into any happiness. William saw it in his eyes, this dismal depression and sorrowful insanity Iszeldier had locked himself in; it was a choice. “You need sleep, okay,” William urged, laying a gentle hand on his shoulder, “just rest, let yourself heal, and you’ll feel better.”

Already, Iszeldier was bleary and dazed from the blood loss, but more so, probably, from lack of sleep. “No…” he breathed, protesting with everything left in him, “I’m can’t sleep!” struggling to, he tried to sit up.

“No, Iszeldier you have to lay down!” William insisted frantically, trying to hold the bandage over Iszeldier’s abdomen but Iszeldier brushed his hands away and before William’s eyes the wound healed itself in a matter of seconds.

Sorely, Iszeldier gripped a hand over his stomach and winced as he tried to sit up in bed and set his legs over the side of the little infirmary bed, “just leave me alone, William…” Iszeldier demanded in a suddenly hoarse and deep voice, completely different, lucid, and fueled with a deep set rage.

Tensing again, William stepped back from Iszeldier who’s eyes were set on only hurting him, “I only want to help you!” he pled, “You have to let people help you and if you don’t you’re never going to get better!”

Grimly, Iszeldier fixed his shirt, pulled it down as low as he could, to cover up the Ciaec, and he froze the dampened part of the hem, “There’s nothing wrong with me!” his voice was so dark, so dangerous, his voice alone shook William’s footing.

One thought on “The Sound of Melodies TS:Re excerpt”