Generally, I would say the self-insert is a big-no-no for serious writers, but I started writing FH when I was thirteen, at the height of my fanfiction craze so naturally I gave myself a self-insert. The sneakier, wackier, hotter, and more unpredictable version of myself with dark hair and big boobs, she was everything I wanted to be! But she evolved into something else. Rather than being the love interest for my MC, she became his cousin. I gave her a level of unexplainable omniscience that is now a deeply woven part of the story. Rather than being campy, Emilie Meyvise is a fan favorite character, who may even be getting a spin-off book dedicated to her!

Considering I was a thirteen year old when Feather came around as yet another “Emily” derivative, one of many, “Emilia”, “Emilla” and other E-names, I can’t help but look back and think, how come Emilie works? How come my naive 13-year-old self managed to create a self-insert that didn’t come across as useless and dumb? I think what it comes down to is flaws. I’ve seen quite a number a fanfiction driven self-inserts that serve to hijack the plot and make the property about the human behind the character. I started off quite early giving Feather a flaw I didn’t have, at least, that I didn’t realize I had, which was a need for acceptance.

Feather, like 13-year-old-me, is a bubbly, know-it-all who has no difficulty making friends, has no concept of personal space, and does everything in her power to be obnoxious thinking somehow that would get her friends. I grew up not desiring the acceptance of others, I just threw out who I was, let them see it all, and took who ever didn’t go, “You’re insane!” I even kept some of the ones who did. But Feather hid a fear she didn’t share, a fear I didn’t develop until after I created her. Feather works through the feeling of rejection from her mother, by allowing her mother to become incredibly dependent on her when they were reunited.

I’ve always been very close with my mother, but when I was 14, I went through the only real distance with her I’ve ever felt. Due in part to being pubescent and enrolled in my first year of “real school” I became a bit of a brat towards her and it hurt our relationship. Feather emulated that in my writing, taking on her own battles with her mother almost under my nose. At the end of FH during my first draft, they were in love and happy to be reunited but in the first draft of LC (book 2) Emilie’s mother’s first scene is them fighting. I’m going to rewrite parts of LC to include more on why they were fighting because at the time, I didn’t realize this fight was all a projection of who I was.

Emilie’s subplot was overshadowed by my first time experimenting with writing gore, and while I was having fun murdering Mark for the first time–he’s a main character, he doesn’t die–I was putting off writing the most self-analyzing scene I had ever written. In this process I got into big trouble, not gonna say what, but I lost my laptop and my ability to write, so over the course of the school year I filled notebooks with bloody scenes of Mark in the hospital dying. Finally, I got my laptop back, and it was dead, it refused to turn on, and was forced to write when our desktop was available.

I only wrote one chapter from scratch, the rest was just typing up from notebooks, and this chapter was called “Why Emilie Hates” it was Emilie’s transformation chapter, from the bubbly young hottie, to her true, darker self. In this chapter, Emilie faces her birth father and is truly destroyed by the things he says to her, and does to her mom. Her powers control her, and she attacks her father before running away, for the rest of the chapter she is numb, wandering, and self-destructive. Her entire persona shattered, she returns to live with Mark’s family now far more cryptic, foreboding, and heartless. In future books, in the midst of being semi-omniscient and annoying, she binge-eats, something I’m guilty of at times, and flings herself into situations way over her head.

Emilie is a part of my psyche that is self-destructive, that longs for everything she can’t have, and destroys everything she loves. The Self-Insert doesn’t get the guy, she doesn’t live in the foreground, she barely even gets a backstory and though she is always smiling maniacally, she is always miserable. I’m not saying this is who I am on the inside, but these are definitely secret fears I have, afraid that I don’t appreciate the good things enough, and that in fear I will destroy everything I love. However, this didn’t stop my betas from putting me on suicide watch when Emilie’s story did finally come to an end.

Without further ado, here is the character sketch for Emilie Meyvise! 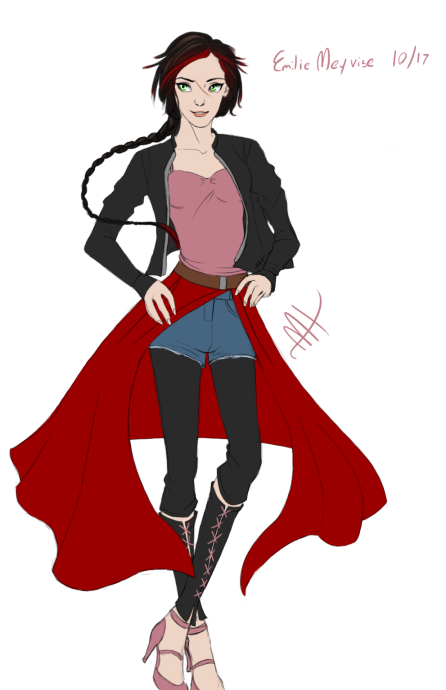 Other Notable Physical Characteristics:   Weak, emaciated legs, unable to walk because she always flies. (LC) a scar on the bridge of her nose. Red tips in her hair

Powers/Abilities: Shadow Feather—class one, ability to defy and manipulate gravity pertaining to things she has physical contact with

Prominent Personality:   Bubbly and obnoxious, often antagonistic towards others. Deeply emotionally scarred by rejection from her parents. She is constantly cryptic, and does everything she can to annoy people with convenient plot-nuggets

Background Information: Emilie keeps her personal life quiet, only ever opening up around Sil, who is also the only one she ever shows affection to.

Still editing FH to death over here, we’re up to chapter 5 and 6 this coming week. So here’s the deal with Laevatein’s Choice. When I finished FH initially I got to work on LC immediately with no planning whatsoever, so the beginning of LC is awful! There’s no sugarcoating it! It wasn’t until my laptop died back in 2011 that I stopped and actually started planning ahead. This was also what started my trend of “Chapter 11 is the doom chapter” because that was the first chapter where I experimented with gore and the whole plot going to s***. Needless to say, when I finished rewriting FH I immediately looked at LC and yelled “NOPE!” resolving to delete everything up to chapter eleven and start over! I plan on delving more into Emilie’s motivation and destruction, as well as her family dynamic. Without shifting the plot too much from Mark getting the life stabbed out of him, I will finally do Emilie justice!

Also if all goes well, and I find my motivation, I want to write a short novel about Emilie and some of her insane adventures before ever meeting Mark. It will be called, Stealth: an attention whore’s guide to not getting caught. I plan for it to be a wild ride of hilarity, adventure and middle fingers. I was planning to start this book for NaNoWriMo, but Dragons on Skye took my full writing attention, and in the throws of editing, I decided to stick with what was easy so that writing could be a pass time, while editing the first book stresses me out.  So I hope to start Stealth either after DoS. since book 15 is still in the outlining phase.

Sorry for the delay, today was a long post.

One thought on “Week 5: The Self Insert” 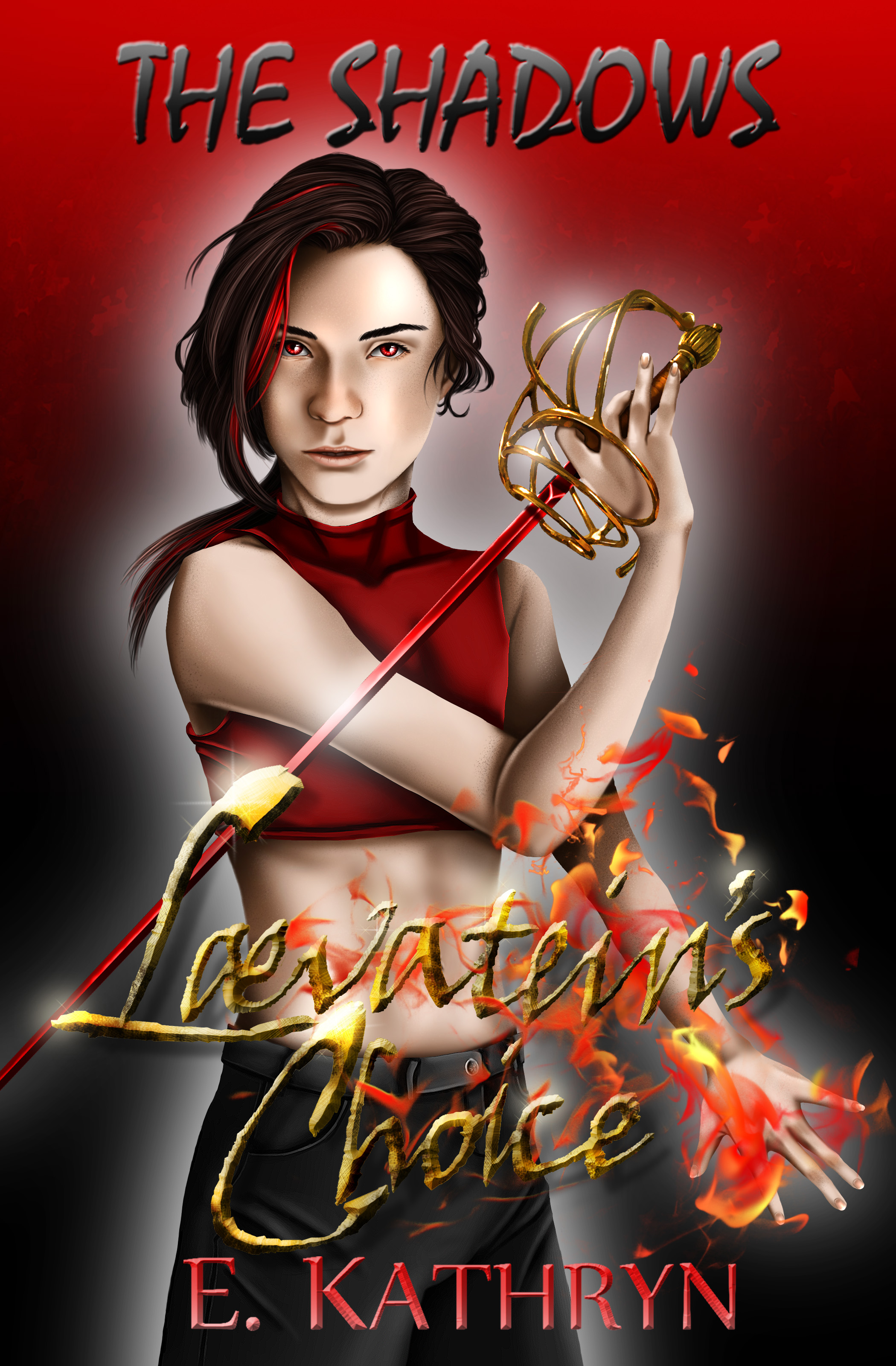 Getting back into the grove of things. 🌎I’m determining not to be a workaholic whilst still being as high strung as possible. I will make this year great! I never really come down from the high of New Years goals, i just keep going. This week is dedicated to a lot of reading, art, a haircut, and world domination. Normal stuff. 🌙 - - - #autholife #newyearsgoals #goals #checklist #worlddomination #youcannoteatmoney #read #amreading #yalovin #bulletjournal #journal
I’m still moderately proud of this temp cover I did for Halo’s Rag Doll back in the day. Sil and Emilie look fierce! 🔥❄️ - I am currently seeking beta readers for HRD though it’s going to be a bit before beta reading starts because I have a lot of editing to do. If you’re interested DM me! 📖✍🏻 - - - #book3 #bookish #bookstagram #bookbaby #indieauthor #writersofinstagram #amwriting #scififantasywriter #digitalartist #digitaldrawing #oldart #frost #selfinsert
These books are the reason why I got into story telling and I finally have the full series! I’ve been an avid Star Wars fan (not full on nerd, but avid) for many years since I was introduced to the phantom menace as a child. This was the time when sci-fi meant magic and travel, communication and heart loss, when being a Jedi was about friends and clinging to each other. I feel as though in an effort to retcon the prequels, and avoid “certain people are special” tropes, the new Star Wars movies make the universe more soulless. On the flipside, the mandalorian has been amazing because it doesn’t shy from specialness and working yourself into your position. These books here are set in the era where new starwars and the mandalorian would take place and they will always be canon in my heart. Rant over. 😋 - - - #starwarsbooks #bookish #bookstagram #starwars #riseofskywalker #mandalorian #babyyoda #jainaandjacen #amreading #nostalgia #bookshelf #starwarsfan #mandaloriancosplay #avidreader
I love people who take the time to do amazing artwork for their book covers. As an artist covers like that are what draw me to a book. 🔥🔥🔥my draft of book 3 is finally almost done, and I’ve got my New Years resolutions all written up. I’m determined to make this a great year and I’m gonna fight for it. 💪🏻 - - - #writer #authorsofinstagram #amwriting #books #bookish #bookstagram #aurorarising #markhalo #iwishyouallthebest #withthefireonhigh #wildergirls #sorceryofthorns #anenchantmentofravens #bookishcandle #2019wrapup #indieauthor #betareadersneeded
I made possibly the most delicious New Years treat this year, A stuffed Brie with Caramelized pecans and dried cranberries, and toasted baguette with persimmon to serve it on. The whole thing cost about $30 and I’m trying to imagine how ridiculously expensive it would be in a fancy restaurant. Utterly luxurious! Definitely going to make this again for a more classy party. Also, this is a @foodwishes recipe I found on YouTube. Shout out to my hero chef John! Hehe I love his videos. 🥳👩🏻‍🍳🧀
Here’s all the books I read in 2019. I’m so glad this year is over. I have a couple unfinished books and of course the most amazing book event of the year getting my Eragon series signed. I of course have to include LC in this pile because I wrote it and I think it totally counts as books read this year. I’m not sure if I could pick a favorite, I get pretty attached to all the books I finish. 📚🔥🥳 - - - #sorceryofthorns #anenchantmentofravens #cursesodarkandlonely #iwishyouallthebest #sixofcrows #grishaverse #kazbrekker #athousandperfectnotes #fliers #shadows #laevateinschoice #withthefireonhigh #wildergirla #jackaby #bookish #bookstagram #bookstagrammer #2019yearend #booksread #thisyear #candles #eragon #happynewyear #yalovin #2020 #booksigning #mentalhealth #nonbinary #lgbtbooks #yabooks